02 Jan At-Risk Children In India: Here Are The Facts

Posted at 01:35h in Learning, Life, Religion by Matt McWilliams

What You Need to Know About At-Risk Children in India

India is a country that has seen many economic and social improvements for its people in the last century; however, child labor, poverty, no education, and trafficking are still prevalent risks the children of India face. The children most at-risk to these threats are ones that live under the poverty line in poor areas all throughout India. There are many religious and non-profit organizations working throughout India to help improve the lives of at-risk children and protect them from the constant threats they face. To learn more about the at-risk children in India, keep reading.

What to Know About At-Risk Children in India

India is a large country in Southeast Asia, bordered by countries like China, Pakistan, and Nepal. While India has one of the oldest histories of any other country in the world, it did not gain its independence until 1947, when it broke free from British rule. Today, India has a population of over 1.3 billion people, only second in population to China, which has over 2 billion. Out of the 1.3 billion people in India, there are over 472 million children under the age of 18 years old. That’s more children than the entire population of the United States of America!

Poverty is a very real and living threat in India, affecting over 800 million people in the country. Some reasons for the current status include a lack of education in areas that suffer from poverty. An unofficial caste system continues to isolate the poor in India, even though the official caste system was banned in 1950. In this system, the poor are looked down on and even persecuted by society. This system prevents poor children from being able to escape the poverty they grow up in.

There are also large expanses of India that are considered rural and desolate; tribes of people groups live throughout these areas. Since these areas lack infrastructure, there are very few jobs available for the locals. Individuals in these areas have to find other ways to sustain themselves, either by relying on family members working in the cities or by living off of the land.

What Threats do At-Risk Children in India Face? 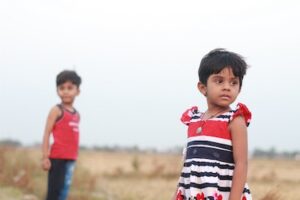 While the poverty numbers in India have started to decrease due to the economic and social developments of the country, the poor still face threats that come with poverty. Poor children are particularly susceptible to these certain risks and usually fall victim to the dangers each risk presents.

Officially, child labor in India has been outlawed since 1986, where the Child Labour Act was enacted, stating that children under the age of 14 could not be hired to work in hazardous conditions. Unfortunately, child labor is still a very real thing throughout India. Children are either forced to work at young ages to support their families or they are snatched off the streets to work for strangers. Usually, the conditions for child laborers are unsanitary and hazardous.

The majority of poor families in India live off of less than $3 a day. Children younger than 10 years old can be found working 16 hours a day to make barely any money. Instead of enrolling their children in school, many parents will have their kids get a job in order to support the family.

Malnutrition affects the majority of people living under the poverty line. This is a health condition caused by not getting enough food to eat, let alone the right food to eat. Because of this, the poor lack sufficient nutrients to stay healthy and develop properly. Many at-risk children suffer from malnutrition, which weakens their immune systems and their ability to recover from infection or disease.

Disease is a constant threat that at-risk children face. As mentioned above, malnutrition weakens the immune system and makes it difficult to recover from disease and infection. Unfortunately, many people in poverty die prematurely simply because they were not able to recover from illness.

The poor in India usually live in crowded unsanitary areas known as slums. In these areas, entire families may be living in a small one-room shed. With such close quarters, it’s easy for disease and illness to spread throughout the slums.

One reason it’s difficult for at-risk children to escape poverty is due to their lack of education. Poverty-stricken areas don’t usually have an affordable education option for children. Schools require funds for students to attend, which many poor families can’t afford. Many children are also pulled from school so that they can work and support the family.

22% of the population in India is illiterate, largely due to the choices the poor face. Illiteracy in India leads to hereditary poverty, where children aren’t able to escape the poverty of their parents and will live poor their entire lives.

One of the best ways to protect at-risk children is by getting them off of the streets during the day. Many days, children will spend their time wandering the streets while their parents work or while they otherwise could be in school. Many organizations have created child development centers, drop-in centers, and day schools with the purpose of giving these children places to go during the day.

Another popular way you can help at-risk children in India is through health and wellness clinics for communities throughout India. In these clinics, volunteer doctors and medical professionals provide care for locals who can’t afford to visit a hospital. People who live in poverty rarely receive medical attention; they can go years living in pain and suffering caused by a simple medical condition. At these clinics, beneficial healthcare is provided to both the young and old.

During a national crisis, the poor suffer the worst. Migrant workers can become displaced and children can be left to take care of their families. During a crisis, the poor largely go overlooked compared to the rest of the needs of the population. Many organizations work to provide food and care for those caught in these situations.

I hope this article was helpful in learning how you can help at-risk children in India. There are many organizations and religious groups that provide aid to these children throughout the country and are always looking for support.

Want to find more answers to your life’s questions? You can read more about our life hacks here.