16 Dec What Does the Tooth Fairy Do With Teeth – The Answer May Surprise You?

Posted at 04:42h in Life, Tips by Matt McWilliams

What The Tooth Fairy Does with Teeth

When I was thinking about children believing in the tooth fairy, I began to wonder what the tooth fairy does with the teeth? This caused me to start researching. What I discovered is very interesting! Each of us has heard about the story of the tooth fairy as small children. We may have even told our kids this childhood tale.

As adults, we give children something to fantasize about regarding a very natural childhood phenomenon of losing their baby teeth. Each child gets a reward from the mythical tooth fairy due to their coming of age.

In my research, I discovered a lot about the legend of the tooth fairy. When we discuss this topic with the children in our lives, it is up to you how much or little you would like to explain. Some children might not believe you at all, while others will be inquisitive about this subject.

In this article, I will discuss some of the neat things I found out about where the tooth fairy legend came from and, of course, what the tooth fairy does with the teeth!

The Tooth Fairy Queen and Her Teeth

The legend of the tooth fairy has seemingly been in American culture forever. Kids around the world place their baby teeth under their pillow, awaiting a surprise from the tooth fairy when they wake up.

When discussing this fairy tale with kids, adults may reference just one tooth fairy or discuss a tooth fairy queen who oversees a tooth fairy kingdom “Fairyland.” In this magical place, many fairies are doing the work of collecting teeth to bring back to their kingdom.

The Fairy Kingdom imagery makes it more plausible to have several explanations for what is done with the collected teeth from children.

These teeth could be used as bricks for the many tooth fairy castles in which all the fairies that collect teeth must reside after all teeth are super strong since they are made out of collagen.

Why wouldn’t they make excellent building materials! These teeth can be used to construct castles and any other buildings needed in Fairyland. Buildings like schools, playgrounds, or amusement parks.

Your child might think, but how do they have enough teeth? Remind them that they are collecting teeth from children across the world! Another thing you should remind your child of is the importance of brushing their teeth correctly. As it would be better if their teeth are white and shiny, as it would make the tooth fairy castle much more beautiful! So remind them that the best way to keep your teeth white is by cleaning them correctly. Tell them that the best way to clean their teeth correctly means that they need to brush for two minutes, floss, use mouthwash, and use these top electric toothbrushes for kids. This is because many dentists suggest that electric toothbrushes are best for kids because they put less pressure on the brush head, resulting in better brushing and less gum injury.

Each child will lose twenty-two baby teeth in their lifetime. There are nearly eight billion people in the world who each started as a child. The tooth fairies have more than enough teeth to go around! 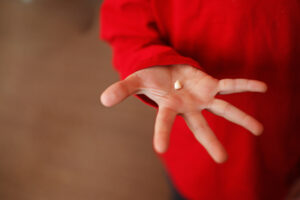 Another plausible idea for what the tooth fairy does with her teeth is that she grinds the teeth down to make fairy dust. This fairy dust is vital to Fairyland. All the fairies use fairy dust to help them complete their magical tasks, including flying to collect more teeth.

Other theories include that the teeth are used to make dental implants for adults and given to babies who need their first teeth. I found this explanation to be very legitimate, especially if you have an inquisitive child. Why wouldn’t the tooth fairy help our dentists out!

Lastly, the tooth fairy could just keep the teeth and collect them as a hobby, give the teeth to other fairies and use them for trading with different types of fairies for other goods. The final theory of where all the teeth the tooth fairy collects is that she uses them to fill the sky with stars since they are so shiny.

As you can see, there is an assortment of ideas about what the tooth fairy does with the teeth she collects. Hopefully, my research will help you answer whatever questions and explanations your children might want surrounding the tooth fairy!

Where Did the Legend of the Tooth Fairy Come From?

The story of the tooth fairy is a long-time American tradition. According to Delta Dental, research shows that more than eighty percent of American households with kids tell this story.

In Deerfield, Illinois, they even had a Tooth Fairy Museum dedicated to learning about the tooth fairy legend.

The story of the tooth fairy comes from American literature. The story first made it to print in 1908 in the Chicago Tribune and then again in 1927 in a play by Esther Watkins Arnold.

The story’s popularity continued to modern-day times. Parents embraced the story as a way to help their children have good dental habits at a young age. The Tooth Fairy Embraced By Other Cultures

In other cultures, the tooth fairy is represented as male or female. She is also described as another animal like a duck or cat.

Telling The Truth About the Tooth Fairy

As your children grow up, they might ask if the tooth fairy is even real? This often happens when they reach the ages of seven or eight.

Telling your child the truth about the tooth fairy is your personal choice. However, it is better to be prepared to answer this question ahead of time.

A well-known psychologist offers this advice when presented with this question. She says to ask your child what they already know. You can ask them why they are asking this question. It might just mean that other kids might mention or talk about this at school.

You might just have to address what the kids at school are saying about it and not dismiss the story. Some children love believing in the tooth fairy and other fairy tales. As adults, we have to be mindful of our child’s age and what believing in these things means to them.

However, if your child has genuine doubts and concerns about the legitimacy of the tooth fairy, you owe it to your child to tell them the truth in a fun and creative way. How can I use the legend of the tooth fairy to help my kids have better dental health? When discussing the tooth fairy story with your children, you must let them know that the tooth fairy will not just take any teeth but will only take teeth that have been taken care of well. This will allow you and your dentist to teach your kids about good brushing habits, flossing, and eating healthy foods.

Do I have to tell my kids that the tooth fairy will only leave money in exchange for teeth? This is entirely up to your discretion. Whatever the tooth fairy leaves are meant to be an incentive to your child for cleaning their teeth and keeping good dental habits to have nice teeth for the tooth fairy to collect. You can leave money or another type of small gift for your child. Remember, your child will lose twenty-two baby teeth, so do not go overboard on the gift-giving!

What do I do if my child will not believe in the tooth fairy? If your child is still at a young age, there are many things you can do to help them believe. You can read them a tooth fairy bedtime story to get them more familiar with the fairytale. You can make believing fun for them through different arts and crafts. Alternatively, you can help them make a special tooth fairy pillow to store their baby teeth.

You can also have your child write a letter to the tooth fairy thanking them for coming to their house. Other ideas are leaving a tooth fairy receipt with the child’s name, address, age, number of teeth received, and the amount of money given. Lastly, you can leave reminders that the tooth fairy has visited, like leaving her wand in their bedroom or adding glitter to the money left for your child.

The possibilities are endless! However, if your child is coming to an age where they are growing up and believing less and less in fairytales, it is ok for them to know the truth about the tooth fairy. Hopefully, they have created great dental habits by that time, which will help them throughout their lifetimes!